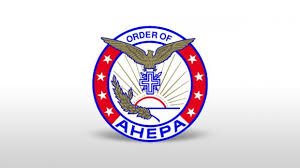 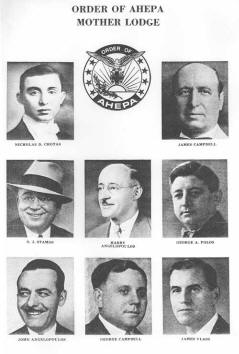 The American Hellenic Educational Progressive Association (AHEPA) is the largest and oldest American-based, Greek heritage grassroots membership organization. Its scope is international with chapters in the United States, Canada, Greece, and Cyprus, and "sister" chapters in Australia and New Zealand under the auspices of AHEPA Australasia.

AHEPA was founded on July 26th, 1922 in response to the evils of bigotry and racism that emerged in early 20th century American society. It also helped Greek immigrants assimilate into society. Today, AHEPA brings the ideals of ancient Greece, which includes philanthropy, education, civic responsibility, and family and individual excellence to the community. Although a majority of the membership is composed of Americans of Greek descent, application for membership is open to anyone who believes in the mission of the organization.

The Daughters of Penelope was the realization of Alexandra Apostollides Sonenfeld's dream. Her desire was to create a woman's organization and because of her perseverence and the encouragement of her husband, Dr. Emanuel Apostolides, a devoted AHEPAN, she formed EOS Chapter #1 with 25 charter members on November 16th, 1929 in San Francisco, California. She was elected the first Grand President in 1931. Mrs. Apostolides envisioned a new beginning for the Greek American women. She drafted the basic principles of the organization which were an inspiration to all women.

The Daughters of Penelope is the women's affiliate organization of the AHEPA Family with headquarters in Washington, D.C. Today, the Daughters of Penelope is a leader in philanthropic, educational and cultural activities withlocal chapters in the United States, Canada, Greece, Australia and Cypress. In 1938 by establishing the first Canadian Chapter in Saskatoon, Saskatchewan, the Daughters became an international Organization. A few years later, with the realization of the Daughters' Chapter in Greece, our link to the mother country became stronger.

The Daughters of Penelope do not only help through monetary contributions, they devote countless hours of volunteer work in hospitals, old people's homes, women's and daycare centers, organize educational seminars, help the less fortunate, support their local church and make a huge difference in their community.

The objectives of AHEPA and the Daughters of Penelope is to promote the social ethical and intellectual interest of its members; to encourage Hellenic study; to cultivate citizenship and patriotism for United States of America, Canada, Greece, Cyprus and other countries in which Chapters exist; and to promote and preserve the dissemination of Hellenic culture and ideals as a contribution to the global civilization. The Daughters promote the spirit of cooperation and brotherhood and work closely with the whole AHEPA family.

The Order of the Daughters of Penelope is non-partisan and non denominational.

To increase regional membership and establish support for the projects and the goals of the National Organization. The District seeks to not only maintain, but to encourage communications and relationships between its member chapters as well as to help facilitate their various philanthropic, cultural and educational projects.

For more information on National AHEPA and DOP click here.